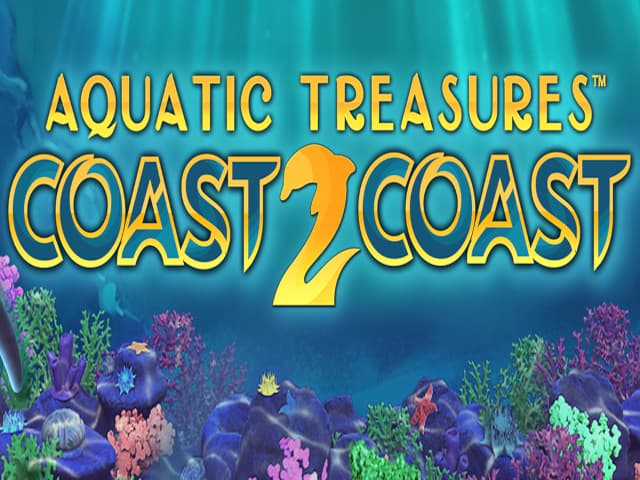 A sequel to an older slot machine is being released by Games Global, the company that now owns Microgaming’s platform, in partnership with Gold Coin Studios. The series’ first instalment, titled Aquatic Treasures: Coast to Coast, was released in 2020. You’re looking at a playable title with an ocean-themed design that falls short of being stunning for those who are prepared to give it a shot.

Only 10 win lines are included on the 5×3 reels of the Aquatic Treasures: Coast 2 Coast slot machine. It may not sound like much, but because they pay both ways, this slot machine offers a top prize that may be as much as 800 times the initial bet. The volatility (medium) and RTP are two more items to note (up to 96.06 percent ). Free spins and growing wilds are two of its key features.

Even 800 times the stake in Aquatic Treasures: Coast 2 Coast might equal $240,000 in cash if the player is employing a hefty wager that round. The Manta Ray symbol must generate 5-symbol combos on all lines in order for them to pay both ways, and expanding wilds do assist in this. Furthermore, this slot machine has medium volatility, so the danger is not excessive. Expect the best RTP to be about 96.06 percent.

The few lines are a drawback, especially given how little they pay for combos when you do manage to make one. On the other hand, combos can develop from both the first and fifth reels, or both directions.

These symbols only appear on reels 2-4 when the Dolphin Wild is active. Normally, I wouldn’t enjoy this restriction, but in this instance, the wilds’ other powers more than make up for it.

One benefit of using wilds is that they may be used to replace both regular and bonus symbols, which makes them useful for obtaining the free spins. The second feature is that these are expanding wilds, which cover full reels and support all active lines.

When three to five adjacent columns of pearl bonus symbols appear anywhere on the reels, you’ll activate the free spins feature. The wilds can act as stand-ins in this situation, as I already said. When 3, 4, or 5 Pearl bonus symbols are present during this feature, you are awarded 10, 15, or 20 free spins. The feature will be activated once more if the conditions are met, and additional wilds will be added to the reels.

Over the years, I’ve played a decent number of slot machines with ocean themes, and I’ve found that most of the time they offer above-average graphics and a glimpse at the creatures that live beneath the surface. The reels will deliver four low-value Royals (from J to A) and four premium sea animals, with magnificent coral displayed at the bottom of the screen (seahorse, starfish, tortoise, manta ray). The Pearl will start the free spins, while a Dolphin will act as an expanding wild.

Aquatic Treasures: Coast 2 Coast falls short of becoming a must-try game, but it is still playable if you can find a slot machine with a high enough RTP.