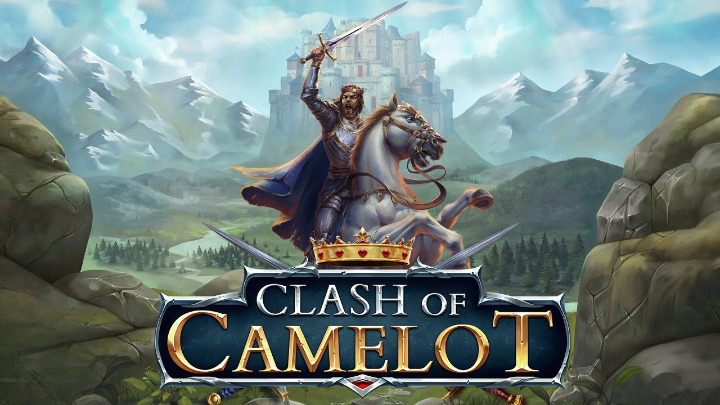 Clash of Camelot is another slot where King Arthur is an active character. Despite this, the mystery behind this legend is hard to understand. No one even scholars can’t prove whether he was a fiction or a real person. If you are a fan of the Play’n GO slots, this is a character in many of their slots. But the main question most players have is his role and existence, which remains a mystery to date. Let’s delve deeper into the Clash of Camelot slot.

Clash of Camelot is a production of the Play’n GO developers who have made some changes to the original Arthur versions. The setting of this game entails a rocky gorge with trees, mountains, and hills in the background. However, when free spins trigger, the location changes to a more romantic site with golden light and several waterfalls like a fjord that happens after heavy rains.

This slot is accessible on any device, and a player needs a bet of 10 p/c to 100 euros per spin to play it. It’s a highly volatile slot with a 10/10 rating, showing it’s worth a try. It has different RTP models, with the highest being 96.28%.

The slot also has wild symbols, which are the cross-sword emblem. The wilds can substitute any paying symbol and appear on all reels with a payout of 100x the bet for a five-of-a-kind line.

Unlike the other slots that feature King Arthur, the Clash of Camelot keeps things simple but effective. It achieves this through the help of features like wilds, multipliers, full reel wilds, and free spins.

Here’s an in-depth explanation of all these.

The wild symbols appear as multiplier wild during the base game round. The wild multiplier values are x2, x5, x10, x25, or x100.

These symbols can land on the 1st or 5th reel during any round. When Arthur and Mordred’s wild symbols land on the same row, it triggers free spins.

Clash of Camelot has four types of free spins. This allows players to choose an option when the free spin feature is active.

Landing wild symbols during this round earn a multiplier value. Additionally, if Arthur and Mordred land on the 1st and 5th reel, they expand and cover the whole reel. After that, they randomly engage in a fight where a maximum of 9 reels are placed randomly on the 2nd, 3rd, or 4th reel randomly.

If you didn’t like the thrill of romance between Jaime and the Cerise of the Games of Thrones, then the action in the Arthurian stories may leave you in awe. It’s believed that Mordred was Arthur’s son who had anger issues because of their relationship with the king. This bores hatred between them, but more about the story vanishes because of an old memory. However, this story has different versions you need to look out for.

Play’n GO maintains a grudge against this slot which is to the advantage of the players. This is because after a fight high chance of getting good returns increases. The slot starts with wild symbols landing on the same row triggering a bonus round. After that, a player chooses the bonus options which suit them.

However, the grudge emerges when two features land on the outer reels. This is where the slot brings out the wilds and multiplier combo to calm things down. Landing a five-winning line earns x100 multiplier wilds worth 10,000x the bet. The max win of 35,000x the bet also boosts things.

Even though Clash of Camelot might not make it to the list of innovative slots, it’s a good slot to test out. It keeps everything simple and not messing the grid with knotting gaming. But it gives players value for their money and time through the wild and multipliers after a competition between the warring parties.