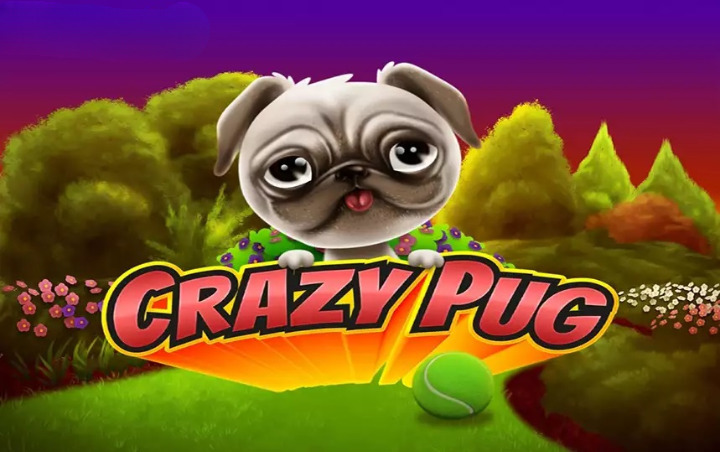 Crazy Pug has the appearance of a typical slot machine, thanks to the three-reel setup. It’s definitely dog-themed, and the adorable Pug is the primary character. The entire slot machine is based on this character, and the rest of the images are designed to complement it. Swintt did a good job with the design, but there are other aspects worth pursuing as well.

Crazy Pug’s 3×3 reels, as well as the 5 active lines on them, are ready to spin. There are a lot of other slot machines that will do a lot better than Crazy Pug, with wins of up to 800x the stake and a 95.07 percent RTP.

The Pug Wild, Wheel of Fortune, and respins are three key aspects to note.

Crazy Pug has the ability to pay out up to 800 times the stake (Maxi Prize). Individual combinations can only pay a maximum of 10% of that amount, with wild combos paying 16x each (80x per spin). It doesn’t sound like the most enticing top reward in the world, and part of the reason for that is that the RTP is only 95.07 percent (you’d generally prefer it to be 96 percent or higher).

Features of the Crazy Pug Slot

The Pug is an expanding wild, which means that if it appears on one of the reels, it will turn all of the others. Wilds can be used to replace other symbols, but they can also be used to form winning combinations, with payouts of 16x the stake per line and 80x the total bet (as expanding wilds, they occupy all lines).

They included a Respin as a second chance mechanic because the main elements of this slot are designed around the idea of having all reels covered by matching symbols. It is necessary to cover two reels with identical symbols initially, and the Respin will only influence the reel that is different.

It can also be triggered for three completely distinct reels (a wild reel, a high value reel, and a low value reel), with the lowest value reel respining.

You obtain access to a Wheel of Fortune if you can cover the full gaming area with matching symbols (including wilds). It will spin and either choose a multiplier to raise the round’s payouts, or it will pay the MAXI award (800x) outright.

Crazy Pug takes us to a dog park, which is seen behind the three reels. The tennis ball is the first symbol on the reels, followed by dog biscuits in four colors/variants, a Frisbee, dog bowl, dog collar, and the Pug Wild. Overall, it’s an ordinary design, but it’s completely themed.

Crazy Pug may appeal to dog lovers, but despite the charming aesthetics and decent features, I believe that the low RTP will make it a slot that most players will avoid.