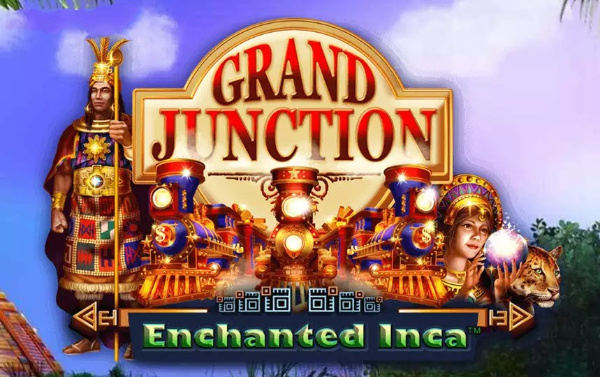 Grand Junction: Enchanted Inca, a brand new slot machine from Playtech that will be released shortly, features a jumble of themes that don’t make much sense at first. Trains and the Incas were not contemporaneous, but in this case, the former appears to allude to one of the slot’s functions, while the latter specifies the theme in use, so you don’t get them mixed up in the design.

This slot has five reels and three rows, with 25 paylines. Grand Junction: Enchanted Inca has a top jackpot of 2,500x your bet, and it’s also worth noting that the RTP is 96.45%, and the volatility is medium-high.

Golden Mask scatters, free spins, the Grand Junction bonus, and the standard Temple Wilds are just a few of the great features I discovered there.

Even though there are 25 active lines, you don’t utilize a lot of coins in your wagers. The minimum wager in Enchanted Inca will be 5 coins with a total value of $0.05. Bets can be increased greatly, with each spin costing up to $500.

The most amount of money you can win in Grand Junction: Enchanted Inca in a single round is 2,500 times your investment. The Grand Jackpot bonus alone has the potential to award a jackpot of up to 2,000x the bet, so it’s feasible you may win that much.

Those aren’t bad payouts, but I’d point out that the slot has a medium-high volatility rating, since there are some that pay even higher with that level of risk.

Grand Junction: Enchanted Inca’s top reward may not be to your liking, but there’s no need to be concerned about the slot’s fairness. I’d say it’s doing better than most, with an RTP of 96.45 percent.

The Temple symbol is utilized by the slot machine to represent the wild card. The substitute symbol will be able to take the place of others and assist in the creation of low-value winning combos. While it can pay up to 200 coins (40x the bet) on its own, ordinary symbols only pay out 100 coins, thus having the entire screen filled in wilds is the optimum situation for a paid spin.

The Golden Mask will also be a prominent feature symbol. This one is the scatter, and getting three, four, or five of them anywhere on the screen awards 1x to 100x the wager, as well as triggering the free spins.

At this time, you’ll have access to 8 free spins. Each time you land another set of 3+ Golden Masks, the free spins will be extended for an additional 8 rounds.

When compared to the paid rounds, the free spins have a significant edge. There’s a chance that low-value Royals will change into wild symbols if they appear on the middle three reels.

When 5+ Train Logos emerge at the same moment, Grand Junction is the name of a feature you can access. It’s based on the Hold & Win respins you may have seen in other games, but once you’ve completed that section, you’ll aim to reach an additional bonus game.

You’ll get 9 spins for the Hold & Spin portion of the feature. Symbols come in a variety of shapes and sizes.

The Coins are what will get you paid, with each one delivering a reward of up to 5 times your stake.

Conductors will add three additional spins to this mode.

Trains are necessary for progressing to the next level.

Depending on how many Trains you collected throughout the Hold and Spin stage, a different variation of the bonus game will be triggered. The Mini, Minor, Major, or Grand bonus is obtained by using 3 to 6 trains. Each one has a varied range of jackpots to offer. By spinning a wheel with a number, the best one offers between 130x and 2,000x the stake (the higher the number, the better the prize).

Despite the odd relation to steam trains in its main feature, Enchanted Inca is nevertheless a slot machine centered on the Inca people’s picture. You see the people and items linked with this South American civilization, and it’s a great game in that genre. Although the design isn’t extremely appealing, it will suffice.

The Royals are represented by the first few symbols, which range from J to A. Images of ceramics, gold idols, leopards, Inca princesses, and Inca warriors appear next. The Temple acts as a wild symbol, a Golden Mask as a scatter, and the Grand Junction logo as a bonus symbol.

Overall, I believe you’ll appreciate the features of Grand Junction: Enchanted Inca, especially considering the 96.45% RTP. The graphics aren’t great, but they’re not a deal-breaker either.