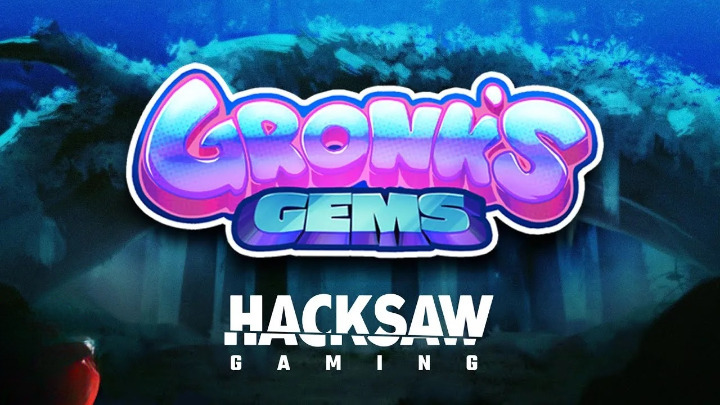 Gronk’s Gems is a production of the Hacksaw Gaming every player should plan to play. The slot has a cluster-paying grid with two bonus rounds, and it’s part of the Pocketz Series slots from the developer. Gronk is a formidable guy with gems protruding from his shoulders, a curious facial expression, and not an angry face. He has huge hands that can tear apart any human limb within no time. If you want to see him well when using your phone turn your device to landscape mode and get a chance to watch him lurking to the sides of the screen. But what does this slot entail?

One thing about Pocketz Slots is that they are optimized for mobile phone usage. However, they can be played on any device, like a desktop or tablet. To bet, a player needs 10 p/c to 100 euros per spin for the base game. Gronk’s Gems has three bonus options, but when playing the regular round, the RTP is 96.24%. But this can reduce depending on the market. It has a medium volatility of 3 out of 5 ratings which can change because of the buy features.

To win in this slot, a player has to have five matching symbols landing in the cluster in the horizontal or vertical reel. However, the winning clusters are removed from the grid and replaced by symbols from the above reels. This happens until no new cluster wins forms.

The features on this slot to pay keen attention to include the charged symbols, epic gems, gem bags, X-Gems, and Gronk’s head. These features occur at different stages of the slot, as we explain below:

The symbol wins can make the rest of the symbols of the same type glow and become charged symbols. The symbols in the charged state are usually traced by a bar on top of the reels, and they remain charged until the ongoing spin ends.

The epic gems are like four symbols, meaning if a charged symbol is in view, the winning cluster will occur after absorption. The epic gem will explode and trigger a cascade after all the charged symbols are absorbed. But the symbols don’t charge during the gem hoarder mode.

If three gem bag scatters land in the base game, it triggers the bonus round. During the gem hoarder round, a player gets 5 spins, while if three gem bags land simultaneously resets, the spin counter to 5. When this feature is active, and the winning symbols are removed, every symbol increases the global multiplier by +1.

The players who love the Hacksaw Gaming slots will love Gronk’s Gems. It’s a slot with cute and ruthless brutality that flows effortlessly. Gronk’s Gems is one of the unique slots from Hacksaw Gaming that doesn’t incorporate the features from the previous slots. It has new audio-visuals and bits that give the fans of this producer a better alternative.

The players interested in the bonus buy feature have a reason to smile as this slot increases their winning options. It’s available in the base game as Gronk’s treasure bonus and during the free spins as an epic gem. What’s good about the epic gem is that it’s clever, simple, and can blast excitement after it gathers enough numbers of matching symbols and then explode to create a way for another cascade.

The gem hoarder is another feature to look out for in this slot among the two bonuses. It can start with as little as five spins with lots of retriggers and a sense of urgency. When playing this slot, ensure you work on the cluster wins to build the multiplier and the X-Gems are close to the cluster to enjoy the multipliers. The bonus round will be the exciting part that keeps the players entertained.

The maximum win of this slot stands at 7,500x the bet, making it the mid-range slot among the Hacksaw Gaming slots. It’s a game every player will enjoy while luck enables them to make good wins. But this is after mastering the features and how to use them to create a win. It’s proof that the developers are trying to diversify and bring something new to the table to keep their players on the right track.