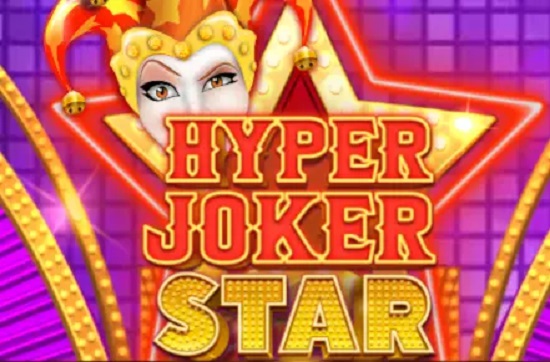 Gameburger Studios is gearing up to release yet another fantastic game through Microgaming, and it appears that it will be exclusive to a few casinos to begin with. We’re excited to see what the third installment of the series has to offer. Each game has a similar premise, with the Joker as the main character, as well as Sevens, Bars, and a variety of other famous symbols dominating the reels.

Hyper Joker Star’s 5×3 reels are completely filled with lines, resulting in a 243-way-to-win system. It can only pay a fixed Grand Jackpot of 5,000x the bet at best, therefore the biggest payout appears to be capped at $200,000. The primary issue I have with this slot machine is its low RTP of 94.10 percent. I’d want to highlight a few key elements, including Joker Wilds, the Rolling Reels mechanic, a Jackpot feature, the Multiplier Trail, and the free spins.

In the Hyper Joker Star slot, you don’t have to be concerned about the betting possibilities. They begin at $0.20 and can be escalated all the way to $40.

If you can claim the Grand Jackpot using a special feature, Hyper Joker Star can reward you with up to 5,000x your bet. The negative is that the RTP is too low, even though the prizes can be decent, and only 94.10 percent of what is wagered is predicted to return to players in the long run (expected RTP is 96 percent or higher).

The Rolling Reels have been implemented, and this is a popular mechanic right now. It needs you to first build winning combos, which, given the ways to win method, isn’t as difficult as you may assume. The Rolls will then delete winning symbols, allowing others to take their place in previously winning locations. If a new combination forms, new Rolls are triggered, and this can continue indefinitely.

A Multiplier Trail is linked to the Rolling Reels mechanic, and as you advance along it, the new winning combos gain in value. While the initial wave of wins pays out ordinarily, the first is multiplied by 2x, the second by 3x, and the third and subsequent waves by 5x.

Another notable feature of Hyper Joker Star is that it will award you with 8 free spins if you get three scatters with the game’s logo on the reels at the same time. Wilds can also substitute for these scatters, making it rather simple to activate the feature.

The enhanced multipliers, which are tripled in comparison to the regular game, are the main benefit of the free spins. Wins now pay 3x to 15x more, depending on the number of the Roll on which they occur.

The Joker Wild, an important symbol in this case but only appearing on reels 2-4, is a substitution that can replace both regular and scatter symbols. It can be used to acquire access to the free spins, as I said before, which is unusual but pleasant.

You collect all Joker Wilds that appear as a consequence of a single spin when playing this slot machine. The more you earn, the more likely it is that the Jackpot Wheel will randomly activate and spin for you. There are prizes worth up to 5,000 times the stake (Grand Jackpot).

Hyper Joker Star’s design makes it appear as if the action takes place on a game show set. Its design features an unbelievable quantity of colorful lights, especially in the background. It’s a traditional topic, but it’s as contemporary as they come.

The Joker Wild and the Free Spins scatter are the first two symbols that come to mind when thinking about the game’s symbols. The four card suit emblems, which are constructed of bright gemstones, are followed by cherries, dice, casino chips, a bell, a dollar sign, and the Red 7.

Hyper Joker Star offers several intriguing possibilities to its players, including fantastic graphics and features that are ready to spice up the action. The 94.10 percent RTP, on the other hand, harms it, and I doubt it will attract much attention at that level.