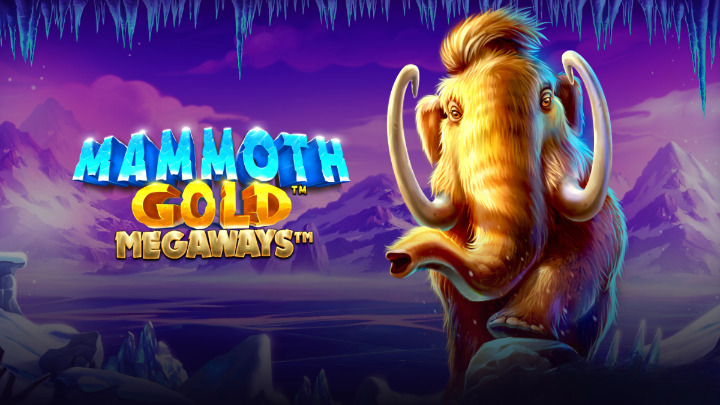 Mammoth Gold Megaways is a new slot game from Pragmatic Play that takes players back to the prehistoric era. But what does this concern the Day of the Dead? Well, it turns out that these two things have quite a lot in common. Pragmatic Play has reskinned Muertos Multiplier Megaways, meaning that the visuals and audio have changed while everything else (features, gameplay, stats) stayed the same.

For Mammoth Gold Megaways, we go back to when the planet was colder than it is today. The theme is different, too- instead of Muertos Multiplier Megaways’ gaming space, Snow, ice, jagged rocks, mountains, and icicles make up the base game background. Probably, the creators wanted to take attention away from the fact that everything else is the same. Another problem could be the sound effects which don’t match the natural setting. It might not bother some people, but I found it strange.

The stats for this slot have not changed, so it is still a highly volatile option with three RTP models. The highest return value is 96.03% when playing in regular mode and betting 20 p/c to £/€100 per spin. If you buy free spins, the return value lowers to 96%. Mammoth Gold Megaways uses a 6-reel grid plus a 4-cell tracker reel at the top, with a maximum number of ways to win 117,649. The number of ways to win varies with each spin since the central six reels can land different numbers of symbols. Also, when a winning combination lands, those symbols are removed from the grid and replaced by new ones falling. If another win occurs, that process repeats until no more wins appear.

All symbols award a win when they land from the first reel over adjacent reels, left to right. Diamonds, clubs, hearts and spades are the low-paying symbols; hitting a six-of -a-kind winning combination for any of these will pay out 0.5 to 0.6 times your bet. The animal tiles (dodo, bear etc.) are high-paying symbols; again, hitting a six-of-a-kind combination with any of these will result in a payout of 0.75 to 5 times your bet. Lastly, an erupting volcano appears only on the top row and substitutes for all other symbols except its scatter symbol.

The Mammoth Gold Megaways game includes several intertwined features, like wild multipliers and free spins with a gamble option. In some places, you might also be able to buy a bonus.

Wild symbols that land on the reels come with a 2x or 3x multiplier. This multiplier is added to a meter and then applied to any wins. If more wild symbols land during the current tumble sequence, they multiply the meter by their respective values. The multiplier meter resets back to 1x at the end of the tumble.

The scatter symbols are chunks of crystal that appear on all reels. You will be awarded free spins if you land three or more scatter symbols. A random number of free spins is selected before the bonus round begins; if you have 3, 4, 5 or 6 scatter symbols, you will be randomly awarded 5-14, 6-14, 7-14 or 8-14 free spins, respectively. If the number awarded is less than 14 and you want to take a chance for more potential wins, there’s an option to gamble by spinning a red and green segmented wheel – know that losing gambles causes players to lose everything they’ve won up until that point in the game.

Free spins have a few differentiating factors from the base game. The total multiplier does not reset until the round ends; as in the base game, wilds increase it. Moreover, +1 is added to the meter with each tumble during free spins. From then on out, every win has that multiplier attached to it. Free Spins can be retriggered when 2-6 bonus symbols land, adding 1-6 additional free spins for each trigger respectively. And lastly (but certainly not least,) where available, players have the option of buying the bonus round for 100x their bet amount

It’s funny; a game about celebrating death somehow had more life than one filled with wildlife. Perhaps it’s because Muertos Multipliers Megaways was the original game, and cloning generally comes across as lazy rather than creative, or maybe playing against the backdrop of Day of the Dead is inherently more appealing than an icy wasteland like Mammoth Gold Megaways. Whatever the reason, playing the same game wasn’t nearly as exciting the second time.

If you haven’t played Muertos Multipliers Megaways yet, then you might be able to get more out of Mammoth Gold Megaways. The simplicity is a highlight rather than a hindrance, with the wild multiplier feature padding out the base game. In saying that, though, since the theme is debatably less lively than before, it might have been nice if the studio had sprinkled a new modifier in there to increase the novelty quotient a notch, maybe even two notches. How Mammoth Gold Megaways performs isn’t bad, though, and the contributions made by wild multiplier values and building the win multiplier from tumbles in free spins can technically lead to wins as high as 10,000x the bet.