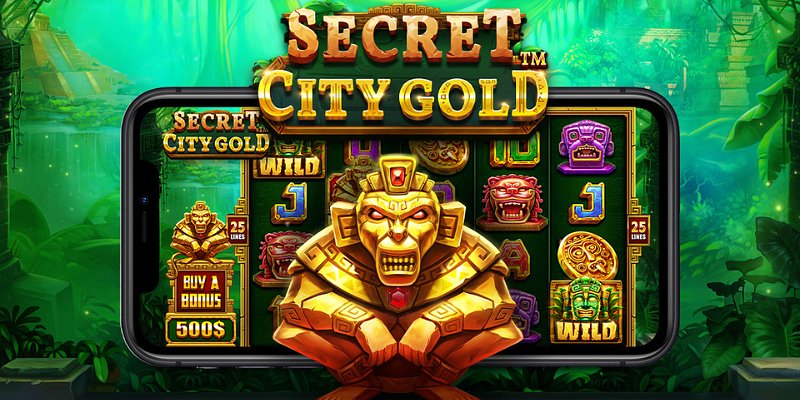 In the current age of google maps and street view, it can be difficult to imagine that a vast portion of our planet remained unknown for much time. For instance, maps from centuries ago have blank spots because no one knew what lay beyond them. It was only through intrepid adventurers who mustered enough courage to face the unknown when exploration could begin. Is it better to have the entire world under constant observation, or did we prefer the days of romantic mysteries that were yet to be discovered? It’s a tricky puzzle. Yet Pragmatic Play has provided an answer with Secret City Gold. In this online slot game, players explore a mysterious corner of our planet and uncover their secrets.

Secret City Gold’s artistry assists in filling any visual voids you may have with a little bit of imagination. The game takes place amidst lush, dense foliage laden with organic moisture, fireflies, and an ethereal waterfall that all together conveys the unique feeling of Central/South American vibes akin to Aztec Blaze or Firebird Spirit. As if this wasn’t enough to evoke excitement, its hearty musical soundtrack helps it stand out even more during free spins.

Secret City Gold is an incredibly unpredictable game that can be played on virtually any device, from a tablet to a desktop. Three different RTP models are accessible for players, with the highest return value at 96.06% when betting normally and increasing up to 96.22% if you purchase free spins (at 85x your bet) – these bets range from 25 p/c to £/€125 per paid spin.

Get ready to spin the five-reel, four-row grid of 25 paylines and win big. You will get your prize by just matching three to five identical symbols along a payline – starting from left on adjacent reels. The rewards range from 0.4 up to 1 times the bet for combinations of 10s, Jacks, Queens, Kings, or Aces, while exotic premium symbols can bring as much as 1.2x up to 4x your initial stake with a golden coin being worth its weight in gold. To complete this section, a highly intense wild symbol takes over all five reels. Wilds can function as any paying symbol and can even reward up to 8x your bet if you hit the ultimate combination of five wilds.

Unlocking Secret City Gold’s mystery and claiming some coins just got easier with its two new features: Shape Wins, the game’s main attraction, and a free spins bonus round. Now you can enjoy the thrill of trying to crack this enigma!

Every time the reels spin, a random shape might show up. This will mark out several positions on the grid and turn all symbols inside it into one symbol type already there. Subsequently, wins will be paid from left to right within this section and multiplied by a factor of between x1 – x10.

When you hit 3, 4, or 5 scatter symbols in the game, you get rewarded with 2x, 10x, and 50x your bet plus eight free spins. The Shape Wins feature is also present during these free spins; however, unlike the base game where each shape multiplier resets after every spin, this time around, it’s a cumulative total that increases by +1 for each subsequent Shape Win pattern that occurs. Plus, to top it all off? Each scatters symbol adds +1 spin so your tally can continue to soar.

Pragmatic Play recently adopted a more aggressive gaming design strategy that resembles the indiscriminate firing of bullets from an automatic weapon. This studio has been launching online slots at breakneck speeds, with no signs of stopping anytime soon. Taking a sniper approach is gratifying, but sometimes you must cast your net wide and wait for luck to bring targets into range like Pragmatic Play does- letting loose wild games as if there’s no tomorrow. The studio is undoubtedly skilled at producing quality work but has adopted a formulaic approach that hasn’t yielded particularly memorable experiences. Though the graphics and animations are visually appealing and certain features intriguing, they don’t go above and beyond in creating something extraordinary.

In other words, Secret City Gold is a prime illustration of the sentiment, as mentioned earlier. With attractive visuals, vibrant music, and a Goa Full Moon Party ambiance, it’s certain to leave an impression on you. Furthermore, there are plenty of tricks up its sleeve that will keep players engaged for hours. All in all, even though Secret City Gold has nothing majorly negative going against it, after playing through it once, we found ourselves asking, ‘what next?’The performance was impeccable, the statistics were impressive (i.e., a 10,000x win cap), and Shape Wins should be on every slot enthusiast’s list to check off. All of this is done with great care and attention to detail.

Despite Secret City Gold’s captivating ambiance, what Pragmatic Play was missing had to be a bold desire to bring its players on a remarkable journey. Undoubtedly, this developer claims remarkable creativity; however, it almost feels like there’s some control imposed within the studio, ensuring each game released adheres to average standards and avoids any ideas perceived as too extreme. Although we could be off the mark, Secret City Gold gave us this impression. While it may not be a bad game in and of itself, you wouldn’t necessarily want to share it on socials before your other friends have had their chance at glory.