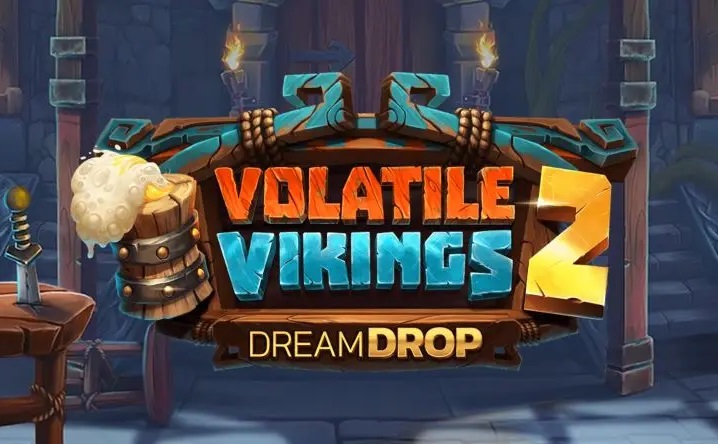 Volatile Vikings 2 is the third slot to be added to Relax Gaming’s Dream Drop jackpot network, and they’re coming thick and fast. The original Volatile Vikings slot machine was a volatile machine with a creepy as well as exhilarating vibe. The second slot is quite similar to the first, with the majority of the gameplay centred on cascading winnings that activate multiplier symbols, which build a persistent multiplier in free spins. The addition of the Dream Drop jackpots is the most significant difference, with the Mega jackpot reaching €10,000,000.

Even though the math model is highly dynamic, the RTP is drastically different. With the Dream Drop included in, the return to player value now stands at 94.8 percent, with the jackpots accounting for 12 percent. The Jackpot feature can be triggered at any stake level, from as little as 20p per spin to as much as £/€100 per spin. The game is equally democratic in that it may be played on a mobile, tablet, or desktop device.

Although reaching the Jackpot round may be the goal, most games are played on a 6-column, 5-row matrix. When 8 or more matching symbols appear anywhere on the board, the game uses a scatter pays technique to reward winners. The low-paying symbols are four runic things, whereas the high-paying symbols are four Viking-like faces and a boar. Landing 8 matching low pay symbols pays 0.4-0.5x the wager, increasing to 3-6x the stake 12+. Having 8 high payouts in view is worth 1-10x the wager, and landing 12+ premiums is worth 10-50x.

When you get a scatter win in the game, the winning symbols explode off the board in a cascade. The empty spots are filled with new and/or existing symbols. The cascade feature is triggered again if a new scatter win arises from the symbol drop.

Following cascades on the same spin, the counter value decreases by one. When the counter reaches zero, the multiplier is activated, and all neighbouring symbols are destroyed, allowing fresh symbols to drop. Another Multiplier Reveal symbol will be one of the new cascading symbols. The overall win value is multiplied by the sum of all obtained multipliers at the end of the spin.

In the base game, landing three scatter symbols offers six free spins, plus one additional free spin for a fourth scatter and beyond. With one exception, the game behaves similarly in free spins as it does in the regular game. The values are added to a persistent multiplier when the Multiplier Reveal activates.

The main game action now takes place in a solidly constructed stone structure with stylish circular windows that allow in dazzling shafts of light. The slot isn’t as magical as previously, but it is cosier; the graphics are noticeably clearer, and the joyful tune, like the rest of the comfortable décor, is motivating.

Volatile Vikings 2 is a Dream Drop slot with a charmingly happy attitude, albeit it pales in comparison to the original in terms of non-jackpot payouts. While many players will undoubtedly choose this game for the opportunity to win a massive jackpot, Volatile Vikings part one remains a more holistically fulfilling game in most other ways.